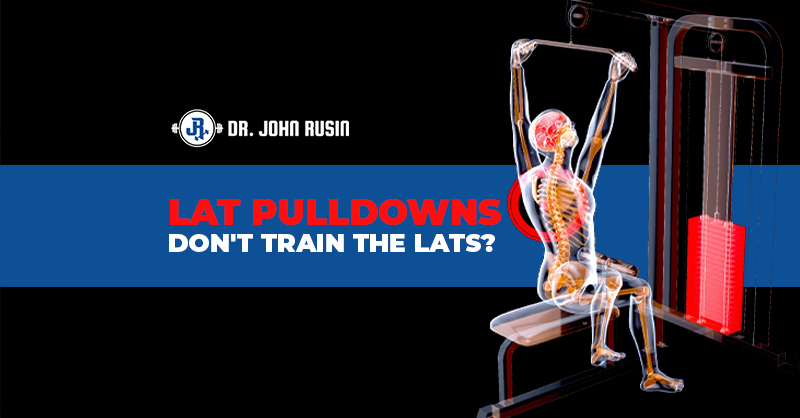 Lat Pulldowns It’s In The NAME

This sensationalizing of the ineffectiveness of simple staple NAME SAKE exercises needs to stop. Because the reality is, biomechanics and human anatomy has NOT changed in hundreds of thousands of years. And certainly NOT in our lifetime. But instead of bitching and talking shit about dubious statements like the above, lets break down this incorrect claim with some more context…

The “Isolated” Roll of The Lats In isolation, the lat’s textbook action is to adduct, extend and internally rotate the humerus (upper arm bone). If you dive into the anatomical actions of the lats one layer deeper you’ll learn that the lats also play a secondary roll in rotation and stabilization of the torso (upper and lower) along with the pelvis.

But the “bro” action that many perseverate on is indeed the action of the upper arm relative to the rest of the body. The so called “isolated” action beloved by bodybuilders and booty chicks alike. But here’s the problem, muscles don’t function in isolation, they function in INTEGRATION. Especially the lats. As the broadest attaching muscle in the human body, the lats are synergistically tied to the muscles of the upper back complex (comprised of 16 muscles around the shoulder blade) and also the pectoralis complex on the front side of the body.

So simply put, in order for the lats to fire and create dynamic movement, the upper back AND the pectoralis groups must also be active playing rolls in dynamic stability and mobility to potentiate the lats to ultimately carry out their primary actions.

Unless you’re dead or knocked unconscious and hooked up to electrodes or EMG’s, there truly is NO isolation. Not from a biomechanical perspective, and certainly not from a neuromuscular perspective. The brain is always on, and since the brain controls the body, we will ALWAYS have relative tension, recruitment and potentiation in muscles, especially those that have a local active mover in the vicinity.

And since the lats are anatomically tied into the shoulder complex (comprised of 4 synergistic joints and countless muscles that work, overlay and interact together in a myriad of different positions around the most mobile joint in the human body, the glenohumeral joint) there is truly no great argument for lat isolation during training or exercise.

So What About The Traditional Lat Pulldown Exercise? Respecting the synergistic nature of the lats, lets take a look at the traditional lat pulldown exercise (the original name sake exercise for lat development) knowing very well that the lats fire in ALL types of lat pulldown variations and derivatives (sorry, it’s just simple science).

Trained in a pure vertical plane of motion (as many lat pulldown machines are setup) the shoulder blade’s rotation becomes more apparent and dominant, hence creating increased targeting at the upper back, and slightly less at the lats. BUT the lats are still working.

Think of the lats, upper back and pecs “sharing” the load necessary to move a weight throughout a complete range of motion of an exercise. If we need 100% as a total to complete an exercise, that 100% is shared between these 3 key players. To what degree remains the question, and the foundation of this debate.

If your goal is to get as strong as possible, then integrating as many muscular movers as possible into the lat pulldown exercise is going to be advantageous. This means bigger grip, more upper arms, and absolutely intense amounts of upper back recruitment to control that free floating shoulder blade on the thoracic cage.

But for muscular hypertrophy (AKA bodybuilding), or trying to bring up a weak point or linchpin in the kinetic chain, there would be great benefit to getting MORE out of the lats, and having less recruitment from the other secondary muscular players in the movement itself.

NOTE: It’s worth repeating that there no such thing as ISOLATION

Making a traditional lat pulldown more LAT dominant isn’t rocket science, it’s anatomical (and neurological science). Simply use a slightly “off” angle of pull with arms slight out in front of the torso angle to create more targeting at lats, and less at the upper back.

And if you want to go one step further, freeing the hands in order to rotate more naturally, or preferentially, having the hands assume a more neutral (palms facing one another) position while incorporating the anteriorly directed plane of motion of the pull, can also reduce the amount of recruitment at the biceps and upper back, theoretically placing more directly over the lats.

In real time execution, this may look like leaning back slightly in traditional lat pulldown machine setups (where the cable is coming from above you and you’re seated with your knees under a pad) OR using a chest supported position on an incline bench with single OR double cables to achieve a more optimal angle of the lats to be the first line of action and the primary targeted musculature of the exercise.

With the equipment options available today, there are a million and one different setups that can both target the lats to their full potential in the pull pattern, but also allow the vertical or “off plane” pulling pattern to get as strong as possible (as safely as possible on the shoulders) for training.

Don’t be a slave to a single exercise variation, especially lat pulldowns. With the combination of the broad attachment points of the lats, and it’s synergistic relationship with the upper back and shoulder complex, there are MANY ways to benefit from this traditional exercise.

There you have it, lat pulldowns 100% train the lats (no matter the setup). But various setup positions, executional styles and anthropometrics will indeed dictate the amount of targeting and recruitment of the lats (in combination with other muscular players).

So can we stop claiming that lat pulldowns do NOT train the lats? Dr. John Rusin is a sports performance specialist and injury prevention expert that has coached some of the world’s most elite athletes, barbell sport competitors, and over 10,000 clients from all walks of life with his innovative pain-free performance programs and systems, which has gained him the reputation as the go-to industry expert for rebuilding after pain, injuries or plateaus. Dr. Rusin is also the founder of the Pain-Free Performance Specialist Certification (PPSC) that has certified over 10,000 personal trainers, strength coaches and rehab pros from across the globe in the pain-free performance training system since 2019.