1. The primary problem with the traditional plank is the lack of deep core activation over an extended period of time. Time to fix it with the RKC Plank!

2. Traditional planks have been progressed to increase the time of the hold, along with increasing the load placed on the body.  The core was not meant to fire for extended periods of time in isolation.  Rather, the deep and superficial muscles of the pillar need to have the ability to fire with maximal force repeatedly over time.

4. Time to throw away the traditional plank, and upgrade your planks with the RKC Plank.

The Proper Set Up

4. Maintaining the core and shoulder positioning, extend one leg back and place at approximately hip width (focus on generating as much tension through your glutes as possible)

5. Extend opposite leg into same position in slow and controlled fashion (in order to maintain tension already built through the core, shoulders, and opposite leg)

6. Pelvic positioning should be slightly posterior rotated (butt up with neutral spine and straight knees) creating your iso-hold position 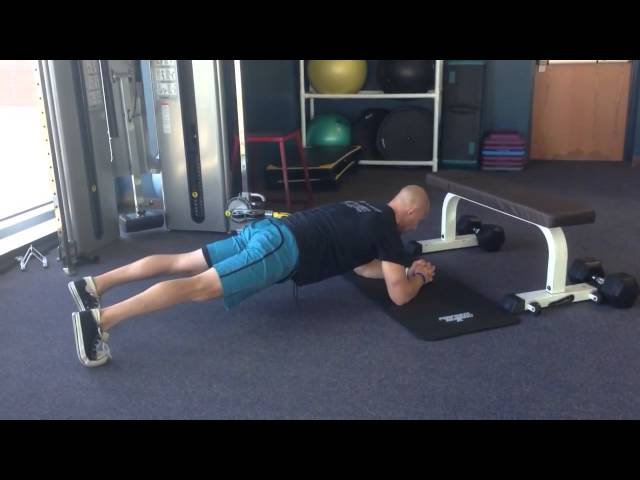 Not Just Another Normal Plank

The positioning of the RKC Plank differs from the traditional plank in a few ways:

1. Pelvis in RKC Plank is posteriorly rotated as opposed to neutral (which is usually not able to be maintained) in the traditional plank

2. Hands are interlocked in the RKC Plank as opposed to arms straight out in parallel with the shoulders, creating more tension through the upper extremities into the shoulder girdle.  Forearms are also positioned at 45deg angle to position shoulders in open packed position (greater ability to generate force and tension)

The primary problem with the traditional plank is the lack of deep core activation over an extended period of time.  Deep muscles of the spine, along with some of the deeper abdominal musculature (transverse abdominals) get overpowered by the core’s dynamic movers (mostly the 6 pack rectus and both sets of obliques).  Increasing tension through maximal contraction of all available contractile tissues carries deep into the core, getting the little stabilizers involved in the stabilization of the body.  Sounds simple, right?

Not so fast, the second problem that goes hand in hand with the lack of deep core activation is the prescription of intensity of the traditional plank.  Traditional planks have been progressed to increase the time of the hold, along with increasing the load placed on the body.

The core was not meant to fire for extended periods of time in isolation.  Rather, the deep and superficial muscles of the pillar (shoulder / core / hips ) need to have the ability to fire with maximal force repeatedly over time.  This again is the reason for bilateral symmetry in pillar musculature, having one side remain relatively relaxed while the opposite side is firing at maximal capacity.

Increasing the time and load in the traditional plank will kill neutral positioning, and ingrain faulty stabilization and movement patterns throughout the spine and core.  Does anyone really care that you can plank for 5 minutes with a 45 pound plate on your back if you can’t even walk out of the gym without getting hurt?  Didn’t think so. Here’s another version of the RKC Plank that I demonstrate:

If used in the correct programming parameters (which we will cover below) the RKC Plank can create a major anabolic hormonal cascade in the body.  Tension is a huge component of metabolic and mechanical stress.  As tension is built, and mechanical and metabolic stress is added to the body, there will be an increased release of anabolic hormones including growth hormone (GH), insulin like growth factor 1 (IGH-1) along with good ole’ testosterone (T).  These are all good things for muscle growth, fat torching, and optimal overall health and wellness.

If the plan for the session is to move big weight, maximize speed production, or total body/multi-joint in nature, programming the RKC Plank as a neuromuscular activator as a component of the dynamic warm up will enhance deep core stabilizer function and overall performance. Programming parameters:

Conversely, if you are looking for a total body finisher that will literally make you shake the RKC Plank will work nicely as a component of a multi-exercise finisher, or as the sole finisher itself.  When the primary goal is to get every last drop of tension out of your muscles, program:

Where as many planks are progressed by either time or load (weight added to the movement), the beauty of the RKC Plank is it’s simplicity.  Due to the very short and intense full body contractions generated through the RKC Plank, it can be naturally progressed through increasing peak force and tension production.  Simply said, as you get better at maintaining an optimal body position and enhancing activation patterns of your contractile tissues, more force and tension you produce, yielding a greater benefit each session this movement is used.

Forget the traditional plank.  It’s time to upgrade your core work with the RKC Plank.  With just a few adjustments in your form and programming, you can add a core hammering, muscle building, fat burning exercise into your arsenal.  Your back and abs will thank you!

Dr. John Rusin is an internationally recognized coach, physical therapist, speaker, and writer, whose published over 100 articles in some of the most widely regarded media outlets in the industry like Testosterone Nation, Mountain Dog Diet, Breaking Muscle, and Muscle and Strength, to name a few.

Along with an impressive laundry list of publications, Dr. John works with some of the world’s most elite athletes, including Gold Medalist Olympians, NFL All-Pro Quarterbacks, MLB All-Star Pitchers, Professional Bodybuilders and World Class IronMan Triathletes.

He takes pride in offering uniquely customized programming to clients of all walks of life in the exact same detail and passion as the Pros! Dr. John’s 12-Week Functional Hypertrophy Training Program is now available to you.